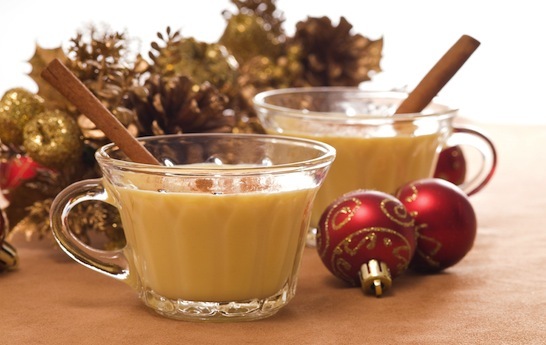 Egg nog goes as far back as the 16th century, but not in any form that was written down. For a long time, the preparation of egg nog was akin to a family secret. The closest we have to early recipes is something called “posset.” Syllabub was another English drink that was quite similar to egg nog, but not quite that signature flavor.

Egg nog has always been a traditional beverage, but the American term was likely coined by journalists in the 18th century. Egg nog was a popular addition to holiday tavern fare, like juleps, toddy and punches.

Posset was a creamy drink where the whites and yolks of eggs were whipped with ale or wine to create an alcoholic beverage with a creamy taste, not all that different from nog. Later varieties added milk to the equation, and people also looked to rum and brandy for the liquor. This gave the concoction a richer taste and made it popular for breakfast as well.

Most recipes for egg nog are simply a combination of whipped eggs and beer. As recipes evolved, different liquors began to show up in the drink. American tastes for sweets also meant sugar was added. The Southern taste for peaches also found its way into traditional egg nog recipes from the Southern United States.

The name of egg nog doesn’t mean much. Nog isn’t really a word, and the egg part only serves to describe a portion of what’s involved. Syllabub is no more accurate a term. Perhaps “nog” was a nod to the liquor in the drink, that one might get drunk if consuming too much nog (like grog).