Zankou Chicken: Not Just for Carnivores 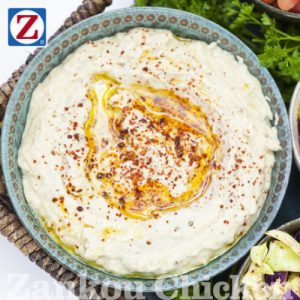 Zankou Chicken, like its namesake, is probably best known for its perfectly roasted chicken. Employees show up early in the morning to season new chickens for the first lunch rush of the day, where they marinate until cooking time. Using a special process, they are able to craft the perfect combination of crispy skin and juicy meat.

That sounds delicious, unless you’re a vegan. The good news is that you and your omnivore friends can all find something you can chow down on at Zankou Chicken.

Although you might not know it, Middle Eastern food (especially side dishes) is surprisingly vegan friendly. Zankou’s garlic sauce is made from natural, vegan-friendly ingredients, and has been since the restaurant opened its doors in Beirut.

Its muttabbal, which is like hummus made with eggplant instead of garbanzo beans, is also vegan friendly and quite tasty. It pairs well with the chicken, but it also goes with a new entry to the menu. The Zankou founders are quite fond of their take on the falafel, which uses a special blend of ingredients for the perfect crunch and a succulent taste. Stuff your pita with some vegan friendly tabbouleh, made of bulgar, onions, mint, tomatoes tossed in olive oil and lemon juice.

Whether you’re a die hard meat eater looking to journey into the world of vegan friendly food, or a tried and tested vegan looking to expand your options around town, Zankou has something to offer to you. Who knows, you might find that Middle Eastern and Mediterranean food is your gateway into a vegan diet.